Begin typing your search above and press return to search. Press Esc to cancel.

I met him at the Freeride Film Festival in Berlin some weeks ago. As a professional he was one of the most successful Swiss snwoboarders. His passion for sports took him from snowboarding to surf, skydive, paraglide and ultimately to speedriding, where he is a pioneer and pushing forward the special kind of sport: Ueli Kestenholz.

We talked about his new film The Pinnacle of Rush and the fascination of speeriding. Enjoy! 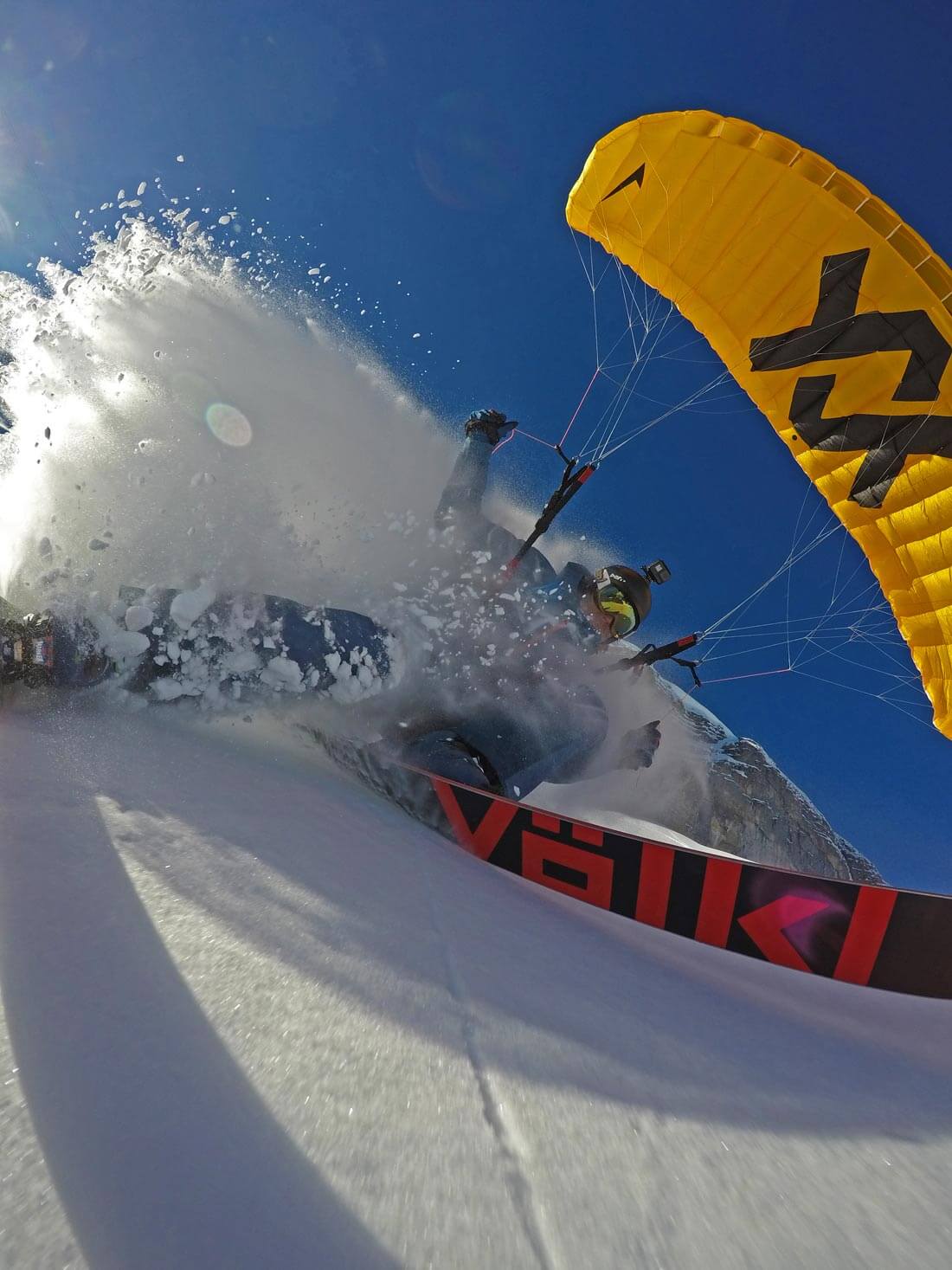 NICE TO SKI YOU: Ueli, for your first time you are with your new movie The Pinnacle of Rush and together with the Freeride Film Festival in Berlin, how do you like the German capital?

(Smiles) I’ve been wanting to go to Berlin for a long time. Finally, with the Freeride Film Festival there was a reason to do that. It was really nice today, we had half a day to check out the city before the festival. We borrowed bicycles and surfed a cool round through the city. Nice!

NICE TO SKI YOU: Today you presented your new movie The Pinnacle of Rush. How did the idea for the film come about?

There were several reasons for the film. I’ve made two films myself with PlayGravity I and II, but that’s almost ten years ago. After that, I did not do any major projects of my own, but took over film parts from Warren Miller or Nuit de la Glisse. For two years now, I have been co-present at the Swiss stops of the Freeride Film Festival and have thought of all the great films: Hey, I feel like making something new, a movie that works for Big Screen. And then I talked to Harry Putz about it – and that’s how it got started. Like me, Harry had not made an own film in a long time. And for us, we are good friends, we have teamed up. That’s how the movie was made.

NICE TO SKI YOU: How did you get from snowboarding to speedriding?

I used to ski a lot when I was a kid and I’ve been snowboarding for over 20 years as a pro. In 2005 I started skydiving. A year later I saw the first pictures of speedriding and thought: Wow! That’s my thing! You just have to combine the experience of professional freeriding with that of parachuting. And then it was clear: this is my new sport! In addition, it was a bad winter and with speedriding I could almost fly with the paraglider where I had snow. I only had to refresh my skiing skills a little bit. 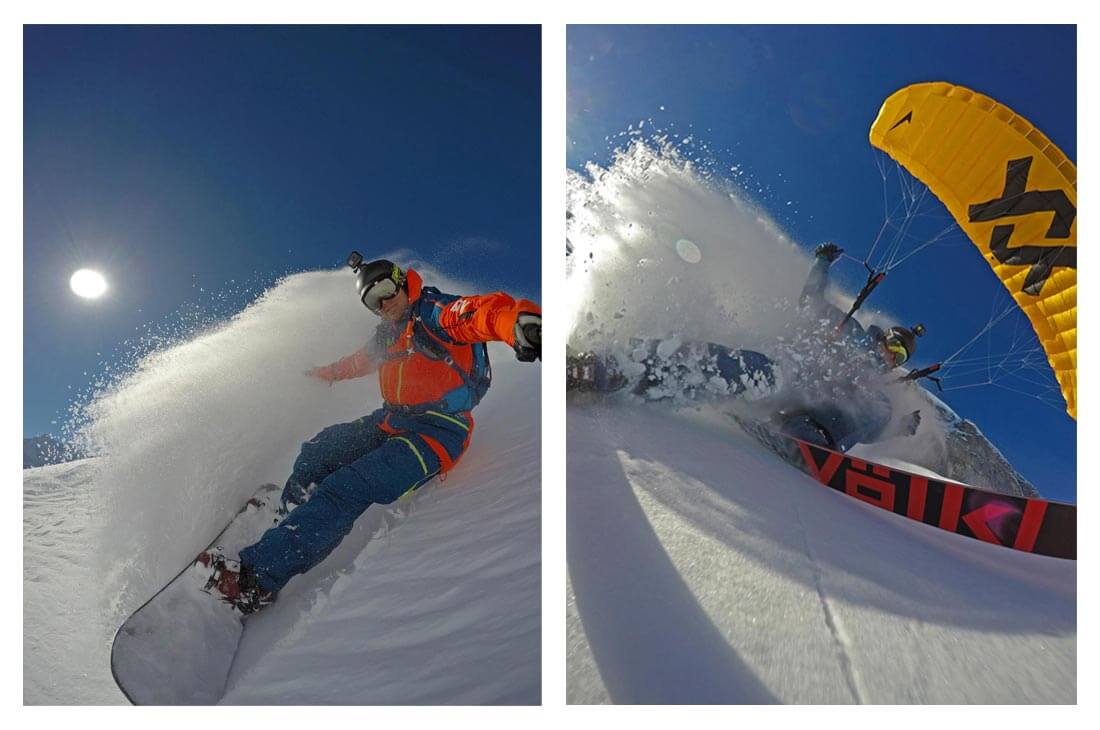 NICE TO SKI YOU: Where can you do good speedrides?

We filmed the most takes for The Pinnacle of Rush at the Schilthorn near Mürren in the Bernese Oberland. Up there you have a great ski resort with fairly steep slopes, well accessible by gondola. In addition, I also travel a lot in the Lauchernalp ski area in Valais, but to be honest, there are only a few resorts that are suitable. You need steepness, height difference, the terrain must be open to fly in, that does not have many areas.

NICE TO SKI YOU: How do you learn speedriding? Can anyone try it?

I have to admit that speedriding is a special sport. You actually have to master two sports well. For me, the flying aspect is even simpler, the more important part for me is freeriding. To read the terrain, know the snow, and memorize a line. For most, that’s too much at once. One should master one of the two sports (freeriding or paragliding) well, that is certainly the requirement.

NICE TO SKI YOU: The Pinnacle of Rush is finished, have you already planned a new project?

No, we’re just focusing on promoting The Pinnacle of Rush as best as we can. There will be numerous mountaineering festivals where you can watch the movie. In the cinema format that’s really great!

NICE TO SKI YOU: If you’re not out with skis and paraglider, where else we can find you in the mountains?

The whole Alps have a lot of potential! I used to travel a lot, but now, as a family father I prefer more to travel at my home area in the Bernese Oberland in Switzerland. But I also love extraordinary spots, for example in Turkey. In the northeast is one of my favorite spots. I’ll be there for sure this winter too. But it’s fantastic to do my sport on the doorstep in Switzerland.

NICE TO SKI YOU: You celebrated big successes in the past, do you miss the often quoted competitive spirit?

No, not at all. I’ve had my achievements, from Olympic medal, X Games victory to world champion title, it was all there. For me, it’s extremely nice that I can say „checked“. It is no longer about being faster than others, but much more about dealing with the mountain. I call it creative skiing. It has feelings of success, if I get the line, which I make myself as well as I would like. That’s a really cool feeling, a sense of achievement. If then cinematic projects still work and people say, “Wow, it’s captured beautifully,” that’s more than enough for me. 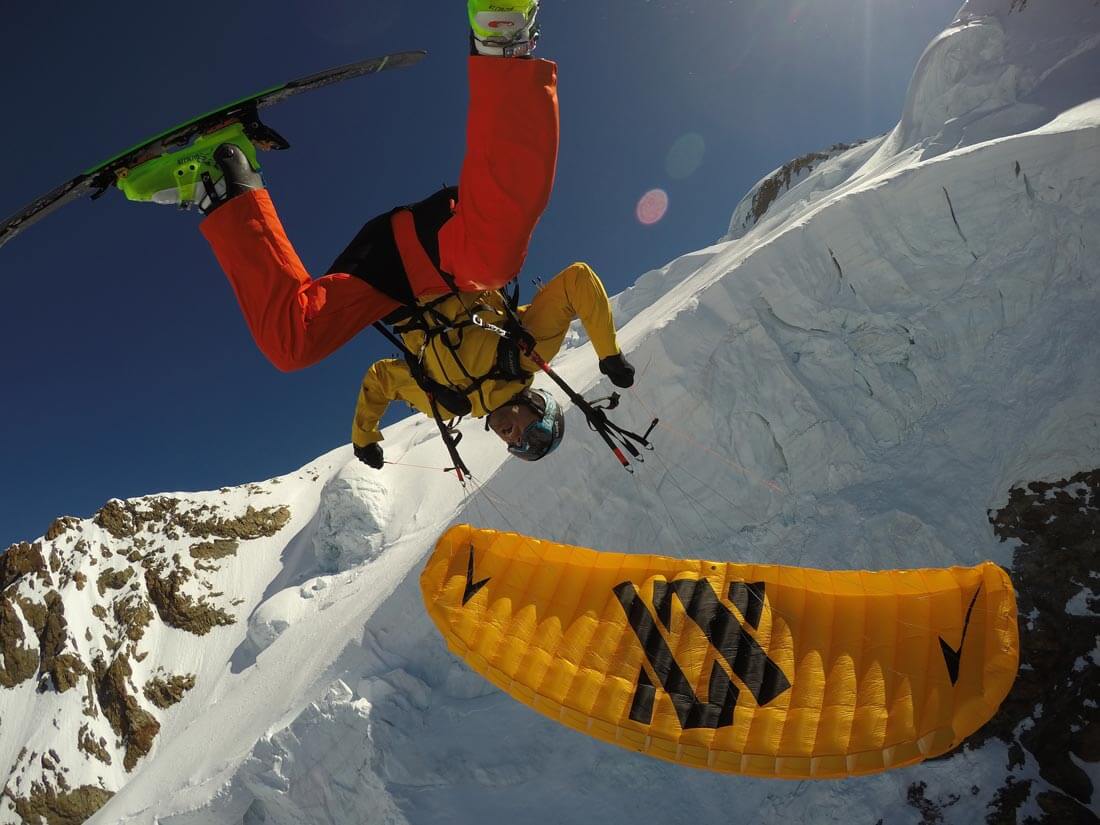 NICE TO SKI YOU: In conclusion, what is your favorite board and which ski do you ride during speedriding?

Today, in one of the fantastic Freeride Film Festival movies a snowboarder was shown, freerider and Protect Our Winters founder Jeremy Jones. He has been making his own boards for about 10 years and specializes in freeride shapes. Since I am only on freeriding, these are exactly my boards – specifically the Flagship and its splitboard version The Solution! On skis I ride the Völkl Revolt 121. It has good lift in the powder and an innovative rocker construction in front and in the back. Above all I like to slide during speedriding – the ski must not be too aggressive. Völkl offers really great skis!

NICE TO SKI YOU: Ueli, thank you very much for the interview!

NICE TO SKI YOU
Cheers,
Peter 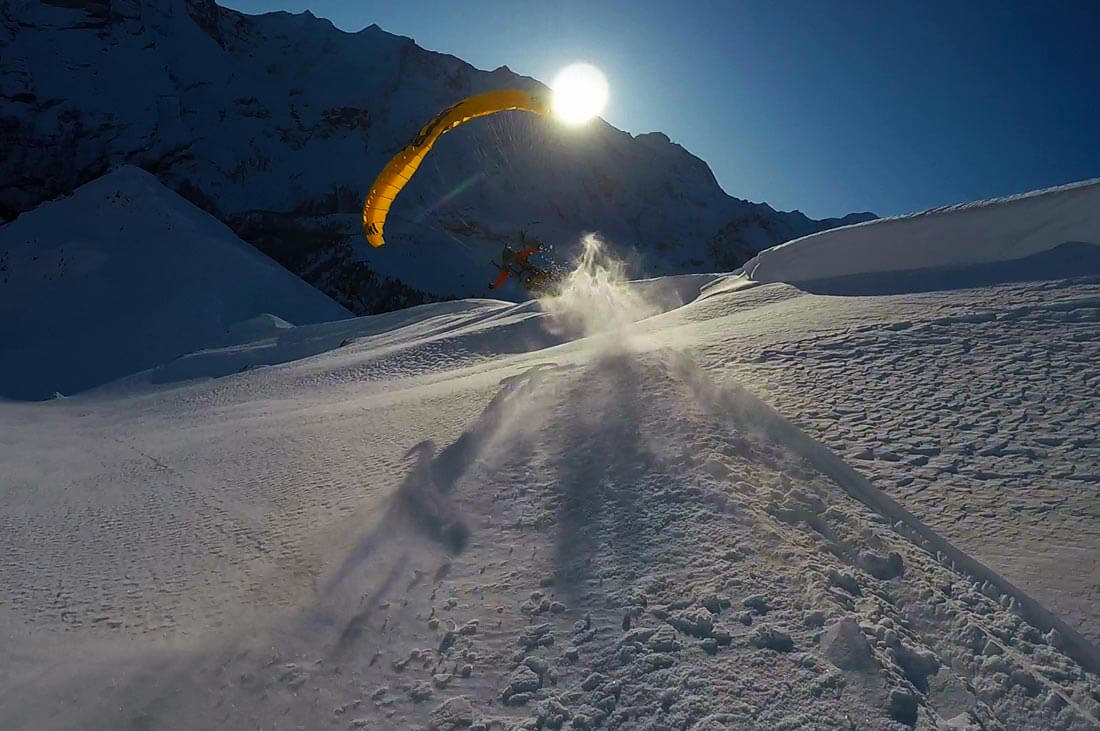 + There are no comments